Isaac Newton postulated three important laws that continue to govern classical physics. STEAM Club members had the opportunity to explore the three laws of Newton using the linear air track. An air track is a perforated rail that is connected to an air blower: compressed air is sprayed from the holes and forms a thin layer on the surface of the track. This layer fills the space between the air track and the inner surface of a glider. In addition to the laws of motion, they also explored the difference between elastic and plastic collision using the same air track.

STEAM Club students then had a chance to interact with a Rubens’ tube as they continued to dig deeper into ‘How waves function.’ A Rubens' tube, also known as a standing wave flame tube (or simply a flame tube), is an antique physics apparatus, used for demonstrating acoustic standing waves in a tube. Invented by German physicist Heinrich Rubens, in 1905, it graphically shows the relationship between sound waves and sound pressure, as a primitive oscilloscope. Today, it is used only occasionally, typically as a demonstration in physics education. 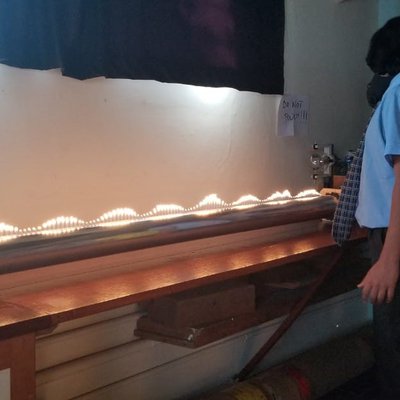