On Saturday morning, members of the birding club gathered at Chaim's house for a birder's breakfast. We climbed down into the Getathuru River valley, which is an oasis of native forest in the middle of an urban landscape. Izyan duly soaked his shoe in the river but it was worth it because we spotted a Bat Hawk circling above its nest. This is a very rare sighting in Nairobi. Later on, we chanced upon a mixed feeding flock which contained a Lesser Honeyguide and a pair of Cardinal Woodpeckers. We feasted on many treats including some legendary muffins baked by Eowyn. All in all we spotted 31 species in two hours.

Thanks to Chaim's family for hosting this event. 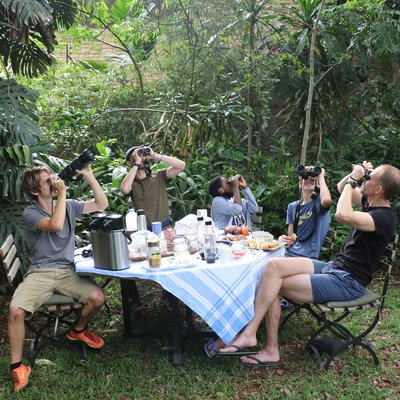